In this series, we’ll examine the business model of attraction or theme park resorts.

These resorts work, simply, by the attraction raising the value of the land uses around them.

In this post, we examine the business model of a waterpark hotel and propose a framework for decision-making.  And although this is mostly about waterpark hotels, the model is equally applicable to any leisure amenity-driven resort.

What are waterpark hotels?  A few examples you would find in the wild: Great Wolf Lodge, Centerparcs, Nickelodeon, and the Atlantis resorts.

These are resorts with waterparks constructed as their primary amenity, with the defining feature that access to the waterpark is limited to those staying at the resort.

As with any attraction type, these lay on an operational spectrum – a) some allow access to outside guests for a fee, while resort guests get in for free (Atlantis).  Others simply b) do not allow outside guests (Great Wolf Lodge, Centerparcs).  This latter model is what we’re exploring in this post, because their business model is distinct.

Also important to mention here are themed hotels or resort hotels such as those found at the Lego, Universal, or Disney Resorts.  These are of the former category above (a).  Guests staying here often enjoy discounted or bundled pricing to the theme park and waterparks, but a resort stay is not a prerequisite to park access.

In the United States, our relationship with cable providers is exactly this.  Bundling benefits both cable providers and consumers because compared to an a la carte model, it provides more channels at a lower fixed price to consumers, and increases the size of the capturable “pie”; revenues from customers.

If this concept sounds familiar in the theme park industry, your instincts are right.  The concept of a modern theme park is exactly that of a bundle as well. 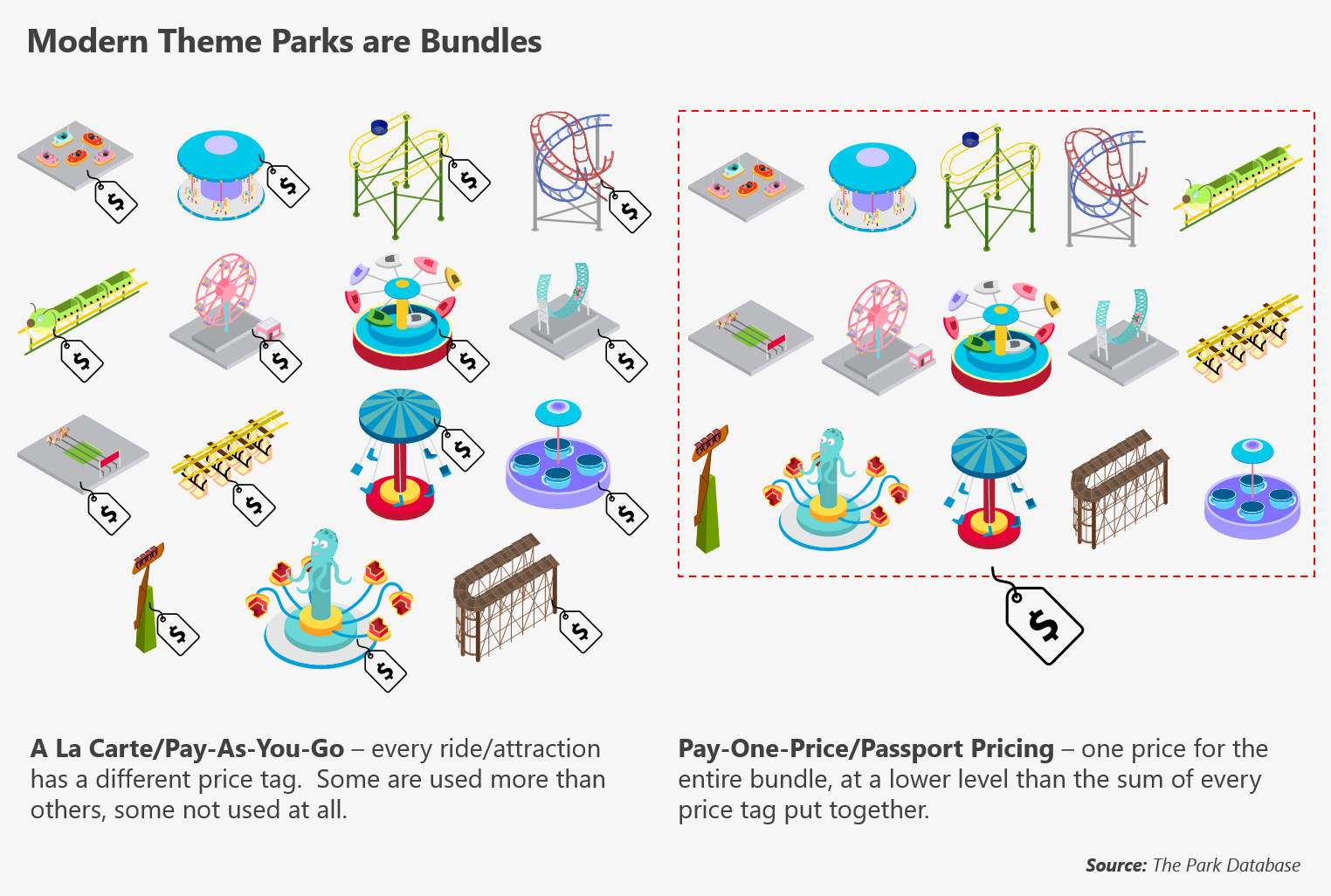 When Disneyland first opened in 1955, the ticketing mechanism was an a la carte model (pay as you go).

One purchased a ticket book containing different tiers of access, and exchanged the tickets for single rides or experiences.  This is where the concept of an E ticket ride comes from; E tickets were rolled out in 1959 as the most prestigious tier of tickets, reserved for the top attractions of the time – think Matterhorn Bobsleds, the Submarine Voyage, Pirates of the Caribbean, etc.

This was a pay-as-you-go model that had its origins in carnivals and funfairs.

Over the next few decades, whether by evolution or intelligent design, the entire industry converged on bundle pricing.  By 1982, Disneyland had abandoned the a la carte model in favor of a pay-one-price model.  It took 2001 for Tokyo Disneyland to do the same, and nearly ten more years for the major parks in Korea, but as of today, there are no major theme parks that operate on an a la carte model.

And what is the pay-one-price (POP) model?

It’s essentially a bundle.  One price allows access to all the rides and attractions, at a level lower than purchasing individual tickets to each ride and attraction on a pay-as-you-go basis.

The POP model is now widely viewed as being more efficient, as decreasing wear and tear, increasing lengths of stay, but most importantly – it’s better for the topline.

Now, how does all this apply to a waterpark hotel? 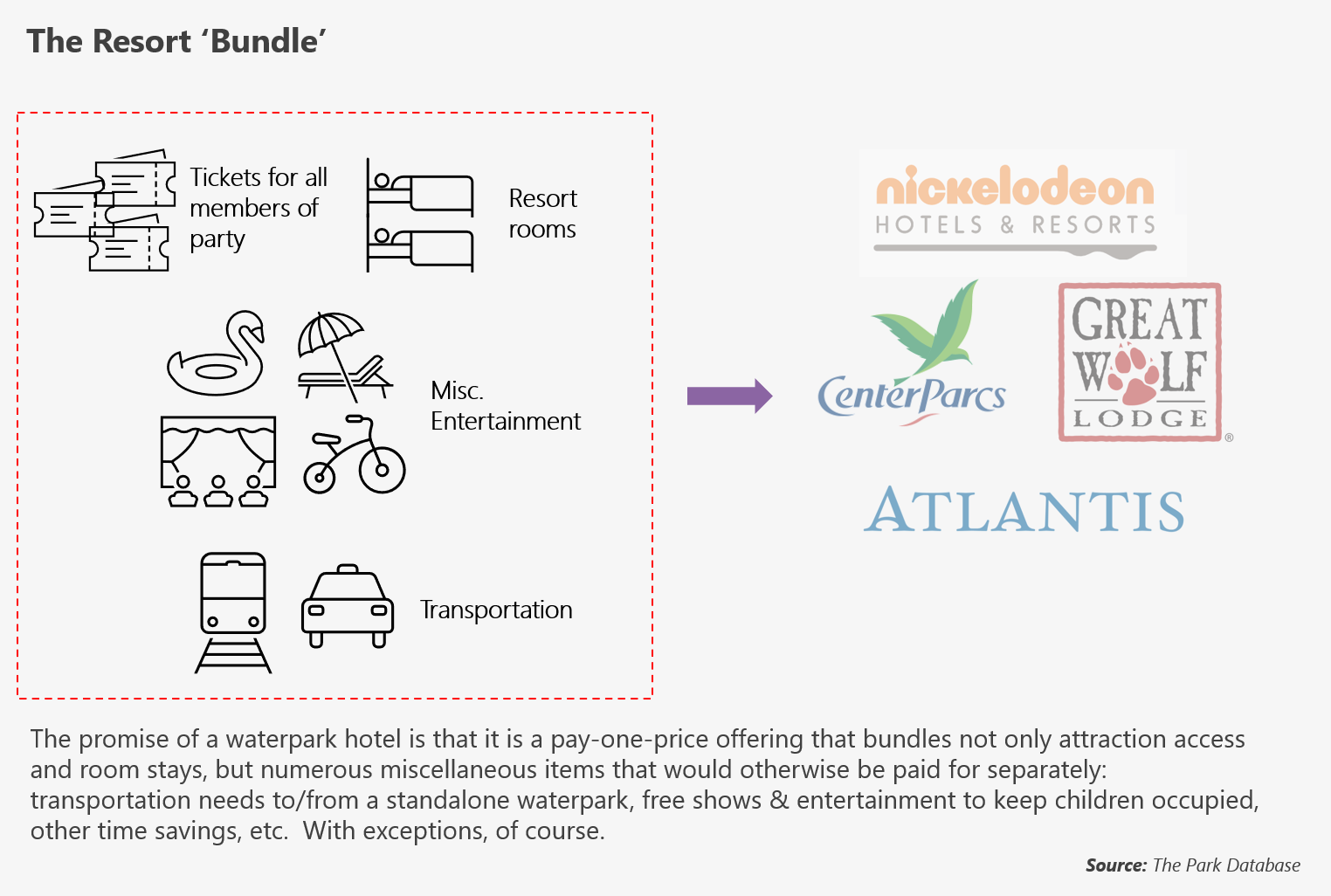 Essentially, these resorts are the attraction industry’s next evolution in bundling.  Here, the experience being bundled is a resort stay with a waterpark visit.  Instead of paying for 3+ separate waterpark tickets, and a hotel stay somewhere offsite, the purchase of a single room provides all of the above.

You could also make the case that many other experiences are also bundled or obviated altogether: such as transportation to/from the waterpark, afterhours entertainment, overall time savings.

But unlike in the cable industry, the delivery of physical experiences cannot be replicated at zero marginal cost.  It is not a digital product.  As a result, such resorts cannot just faithfully develop a typical hotel and a typical waterpark individually and combine them together.

Instead, both products are scaled down somewhat, but emerge as compelling because they are combined.  On one side, what would be classified as a limited service hotel gains from being associated with an attraction or outfitted with a theme.  On the other side, a scaled-down waterpark of 8,000 square meters in size (compared to a typical outdoor waterpark of 40,000-60,000 sqm) gains from its tight integration with the accommodations.  This is the bundle.

In so doing, the waterpark resort should see an increase in demand as compared to a typical resort without the amenity.  This increased revenue should also more than offset the costs of constructing a resort with a larger-than-normal amenity contained in it.

So does it work?

Theoretically it Works in Theory

How does a resort make money?

In a hotel, the two drivers of revenue are its room rate (as measured by ADR or RevPAR) and its occupancy rate.  Some hotels do make more money from peripheral operations, yes, but we’ll keep the example simple for now.

To offset the increased cost of the combined resort, either of the two variables – or both – need to be higher for an attraction resort compared to a standalone resort operation.

Does this work in practice?  Let’s take a look at Great Wolf Resorts and Centerparcs, as their financials were/are public: 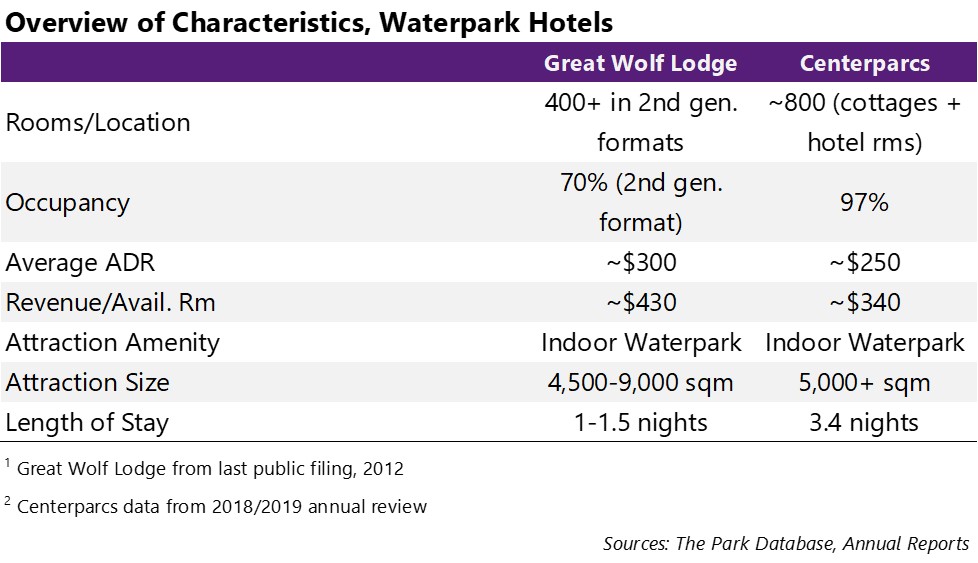 Let’s compare these measures against some well-known hotel chains operating in North America and Europe, which are where Great Wolf Lodge and Centerparcs operate.

Great Wolf Lodge’s ADR in 2012 is comparable to that of luxury hotel levels in 2019, while Centerparcs also holds its own against the Marriott, Hilton, Intercontinental brands, and demolishes everyone else on the occupancy front. 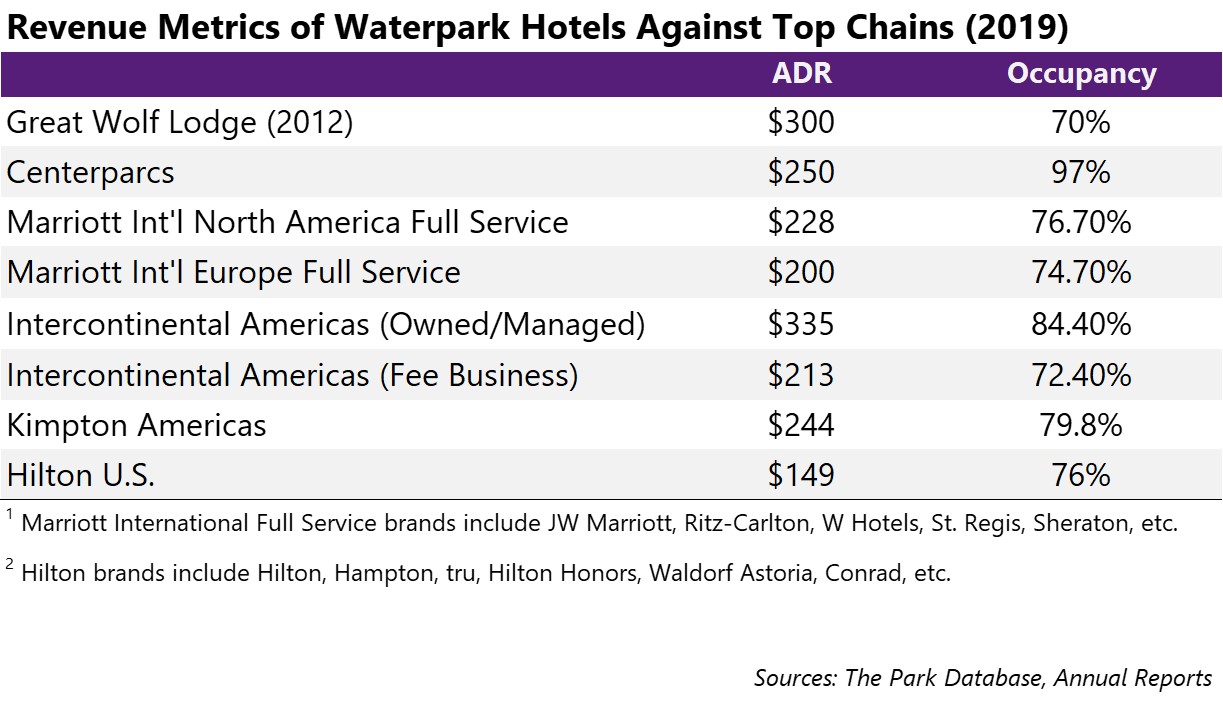 With primary demand measures outperforming those of their peers, we can safely say that in theory, the addition of a waterpark to the hotel ‘bundle’ can indeed raise revenues.

So revenues may be higher than in a standalone resort, but what about profitability?  After all, the development cost of a waterpark and other associated amenities would be substantial.

First, let’s take a look at development costs for waterpark hotels and resorts.  Of those built and announced in recent years, development costs per room have ranged from $300,000 to $500,000 (USD).  These costs are squarely in the range of full-service and luxury hotels, according to HVS. 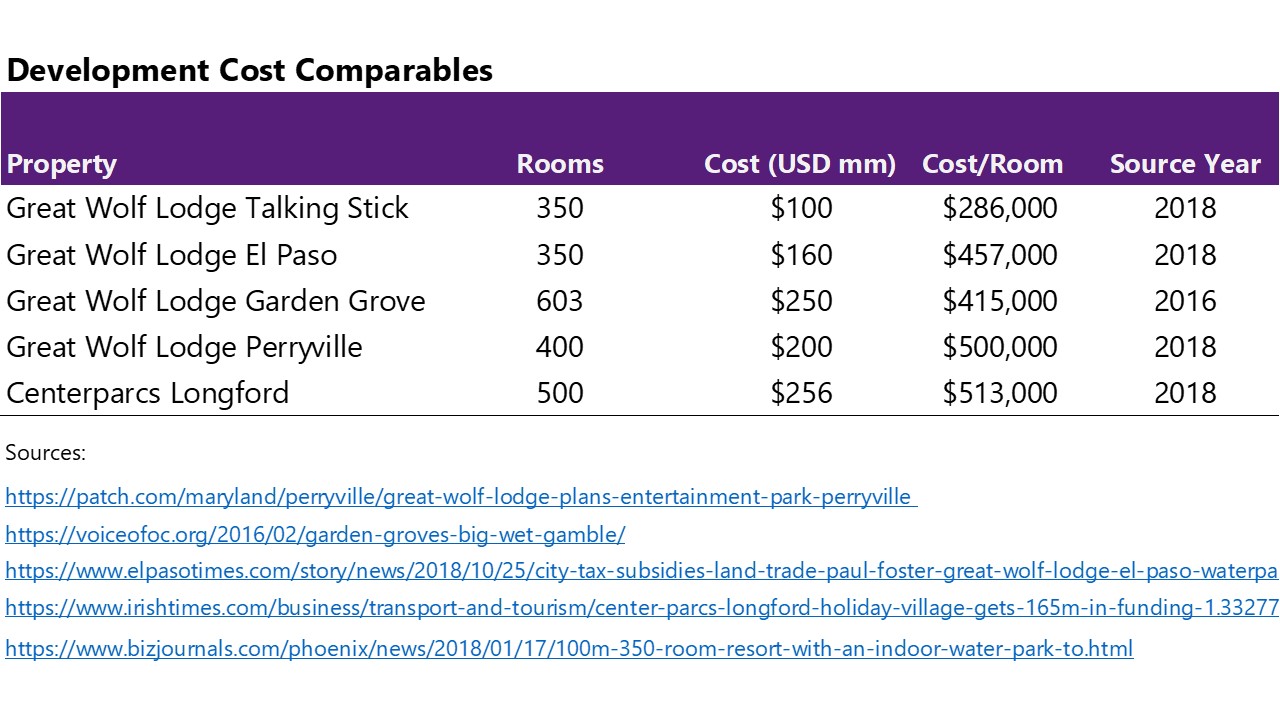 But what is the appropriate comp set to use for waterpark hotels?  Is the comparison really against a full service/luxury hotel, or something more economic?  What is the hotel class level of a waterpark hotel…without the waterpark?

This is a difficult question to answer, and opinions vary widely.

The attraction industry heuristic has been that waterpark or resort hotels are essentially motels; economy, 3-star hotels with theming slapped on them.

But we think this might be a little too simplistic, and underestimates the product.  FF&E standards have increased over the past decade.  We would judge the rooms would at least pass for the limited service/midscale extended-stay level, by HVS’ standards – consider that the former Nickelodeon Hotel (with waterpark) in Orlando has been rebranded as a Holiday Inn Resort, squarely in between the midscale and upscale extended stay categories.

You can be the judge (see pictures below), but for the purposes of illustration, we’ll use the development cost of a limited service/extended stay hotel ($150,000/room) for the comparison. 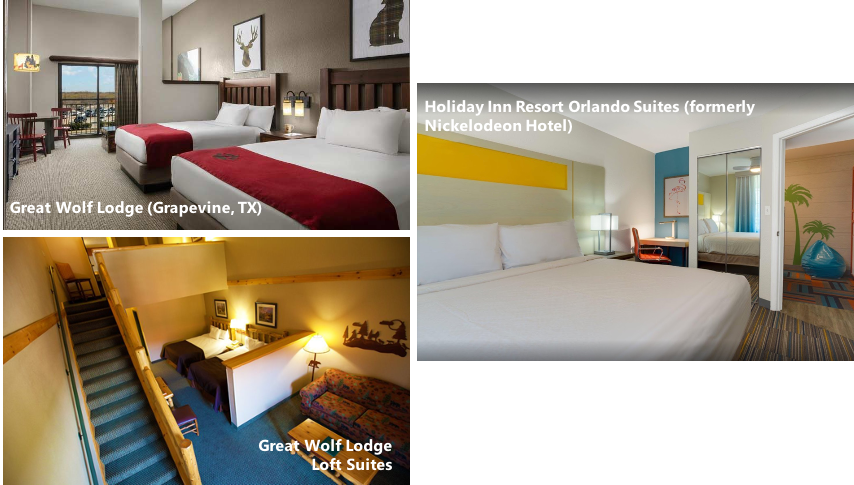 So given all of the above, what is the profitability?  Let’s start with an example below.

A waterpark hotel at the upper end of the development cost range ($500,000/room) would presumably also generate revenues at the upper end.  Great Wolf Lodge’s total revenues per available room were $430 in 2012, and adjusted for a theoretical 2-3% inflation rate yields $500 by today’s standards.  A 30% margin gets us to a 7-8% return on the development cost.  This is indeed a simplistic example.

All else being equal, this example would be equivalent in terms of return rates as developing a limited service hotel achieving total revenues of $150/room (we assume 50% peripheral revenues on top of a $100 ADR).

These are illustrated below. 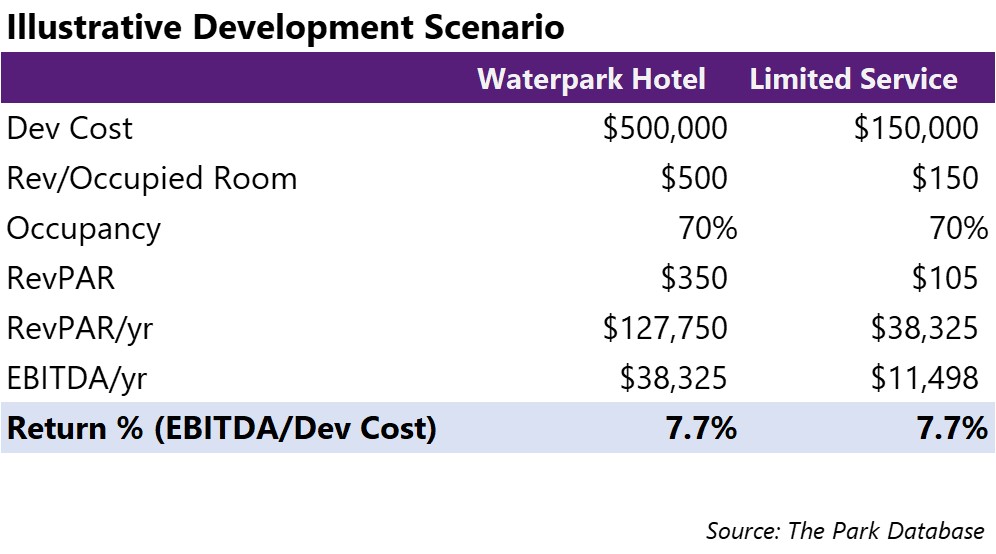 Both models in the theoretical confines of this chart work beautifully, and you might argue that it’s too simplistic.  But now we have a framework to illustrate the tradeoffs and decisions to be made, like:

Here’s a table to think through those scenarios.

Ultimately, a waterpark hotel is not a magic pill.  Through product bundling, it achieves higher unit revenues (per room) than standalone hotels of similar size and scale.  However, these are offset by higher development costs.  Its profitability depends on market characteristics and competition, and decisions about whether it is worth it depend on the potential alternatives.

To return to the initial point: waterpark hotel operations work because of the waterpark.  It raises the value of the hotel operations in which it is constructed.  This is the underlying principle of an attraction resort.

A theme park is a bundle, and a resort another type of bundle.  Bundling is an efficient means of pricing that optimizes revenues.

This is all to say that in a resort, there are true synergies from the placement of land uses.  More on this in Part II, to be continued.

If you’re interested in resort planning tools, be sure to consider our Attraction Resort Sizing and Planning Tool.  It contains the world’s top attraction resorts, broken down by detailed size and component.